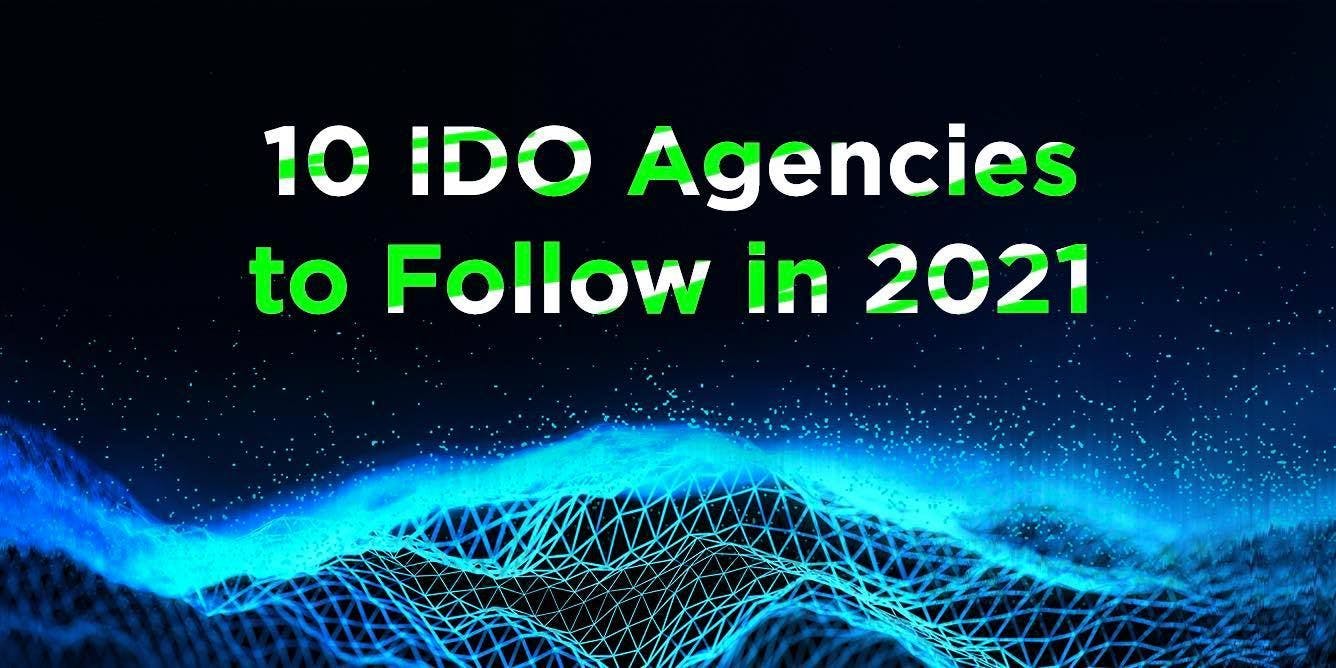 If you want to have the latest updates and researches about crypto and NFT industry and participate in different crypto contests and activities - Follow me in Twitter.
#Check out my previous articles at HackerNoon:
Crypterius
X10 Agency recently was mentioned in the list of 10 IDO Agencies to follow in 2021 compiled by respected Influencer and Journalist Tanvir Zafar. We also would like to shed a light on our colleagues who's achievement and approach we respect and admire. We attach the original text of the article below:
2020 was considered 'the year of DeFi.' The TVL (total value locked) in decentralized finance topped $16 billion in December 2020.

This success brought IDO (Initial Dex Offering) to the fore, as a means of raising funds for projects and attracting even more investors.

Although the market for Initial DEX Offerings (IDOs) is seeing such a substantial growth, it has also given a wide leeway for other industries that play complementary but essential roles to the further development of IDOs. One of them is marketing.

Companies specialized in providing dedicated IDO marketing services became sought-after, leading to a massive growth in their number. In this post are 10 of the best IDO agencies that have established a proven track record and helped notable crypto projects raise serious money.

With a dedicated team of renowned international experts, each with specialties in translation, public relations and marketing know-how among many other skills, they are a big name in the IDO marketing space. Their personalized end-to-end marketing services include public relations, video marketing, community management etc.
X10 Agency
This is another highly rated and fast-growing crypto marketing agency that creates full turn-key solutions from the essentials for successful IDO promotion.

They have worked on lots of notable projects with use cases in different industries and have proven highly successful in the IDO promotion market.

Some of their IDO services include advisory, marketing, PR, and influencer marketing. The company has proven to be successful especially in marketing and growth hacking for the Asian markets.
TokenMinds
TokenMinds is a market leader in different blockchain and crypto consulting services including IDOs.

With a rich experience of over 4 years to back their expertise, and a treasure of over 130 completed projects, Blockchain App Factory is undoubtedly one of the best IDO agencies. They work closely with their clients from origin to dispatch.
GuerrillaBuzz
GuerrillaBuzz is taking crypto marketing to the next level by creating and distributing relevant, valuable and consistent content that attracts and retains a defined audience.

They have helped more than 30 different blockchain clients and raised more than $300 million over the years through next-gen content marketing.
Coinbound
Coinbound is one of the marketing agencies that has recently expanded to offer IDO marketing services and received recognition as one of the fastest growing agencies.

They offer a suite of marketing services including SEO, SEM, influencer marketing to help their crypto clients go viral. They are associated with some pretty big names such as OKEx, eToro, ShapeShift, Coinmine, Apollo, CoinStats, MetaMask etc
Crynet
Crynet is a data-driven marketing agency that quickly grew into a full service marketing agency with a presence on 3 continents (which are home to many investors).

They advise on overall strategy and execute through a range of services including media buying, community building, Blockchain HR and technical support.

Specifically, they have unique coverage in Korea, Japan and China allowing them to reach a wide range of crypto investors leading to successful IDOs.
Antier Solutions
Rather than only a marketing agency, Antier Solutions presents itself as a blockchain development company. They hold proven experience of offering comprehensive end-to-end IDO services from idealization, white paper creation, marketing, to token listing. They have a robust team of 200+ finance and technical experts to work closely with their clients.
Infinite Block Tech
Infinite Block Tech specializes in end-to-end IDO development and marketing solutions. They offer a complete service from strategy & roadmap, token development, marketing, Blockchain integration, and post-IDO support to assist their clients and ensure the IDO is a success.
Flexe
Flexe.io boasts of a remarkable team of experts who are well versed and knowledgeable in the industry.

They offer so many advertising and marketing formats including SMM, community management, funnels, white paper creation, and exclusive promotion in Japan, Korea and China.

They can easily create successful IDOs through their strategic marketing and community management services.
Wrapping up
The IDO model is here to stay because it offers vast transparency and leverage to stakeholders through decentralized fundraising.

IDO marketing agencies will be available to help get amazing projects -- big or small -- the attention of users that are eager to jump on the decentralization bandwagon.
To see the original piece of article - follow the link!
How China's New National Cryptocurrency Changes Everything
Sergey Baloyan
Entrepreneur, X10.Agency Founder 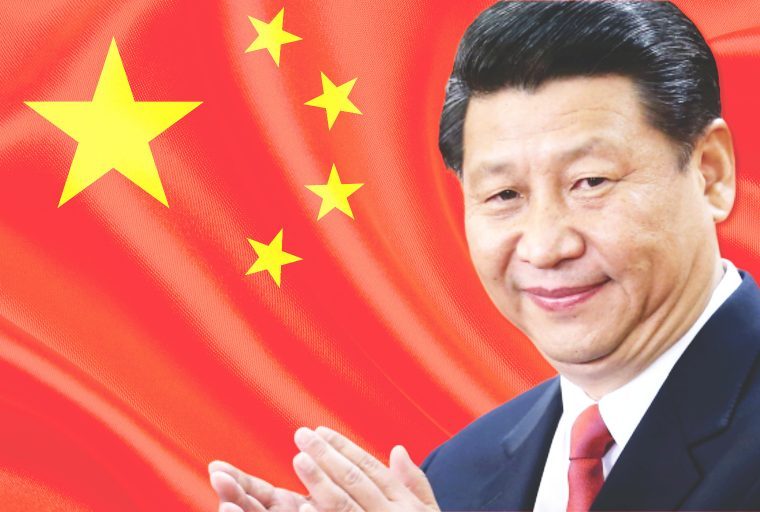 China is launching a national cryptocurrency. In this article, we'll tell you what information is already known about the project at the moment as well as how it may change the financial world.
A bit of History
In October 2019, Chairman of the People's Republic of China, Xi Jinping, said that the development of blockchain technology is one of the priorities of the state and called for accelerated growth of the industry. By that time, it was already known that China had been developing its own cryptocurrency since 2014.

News about this periodically surfaced, although most crypto enthusiasts know China more for their strict regulatory actions — significant restrictions on cryptocurrency investment, the inclusion of mining in the preliminary stop-list of industries that should be banned, closure of blockchain conferences by the police, and so on.

Much has changed since Facebook published their initial plans for Libra. The prospect of a private company with 2.3 billion users worldwide issuing its own currency made the idea much more real to governments around the world.
China took it as an incentive. First of all, to compete with the dollar in the digital payments market and, ultimately, to change the entire global financial system.

Looking at the example of China and understanding what the future may hold, many other countries have announced the development of their own CBDCs (Central Bank Digital Currencies). For example, central banks for the European Union, South Korea, Russia, Sweden and a number of other countries have announced their own developments in the field of state cryptocurrencies.
In April 2020, screenshots of the first version of the digital yuan application appeared online. According to preliminary data, the tests began among the "white list" of clients of the Agricultural Bank of China (the 7th bank in the world in terms of net profit) in four pilot regions: Shenzhen, Hong Kong, Chengdu, and Suzhou. In April, Suzhou enterprises even intend to pay 50% of transport subsidies to local workers in the new digital currency.
A couple of weeks ago, it became known that on April 25, 2020, China will launch its national blockchain platform called BSN (Blockchain Service Network). Many believe this is the first, fundamental step before the launch of a global financial project - a government-backed cryptocurrency called DC/EP. And it seems that the country is taking this initiative more seriously than ever before.

Based on the screenshots that appeared online recently, it is clear that the crypto-yuan will be launched soon enough. More and more experts are saying that this could change the entire global financial system. So, what is known at the moment and what conclusions can be drawn from it? 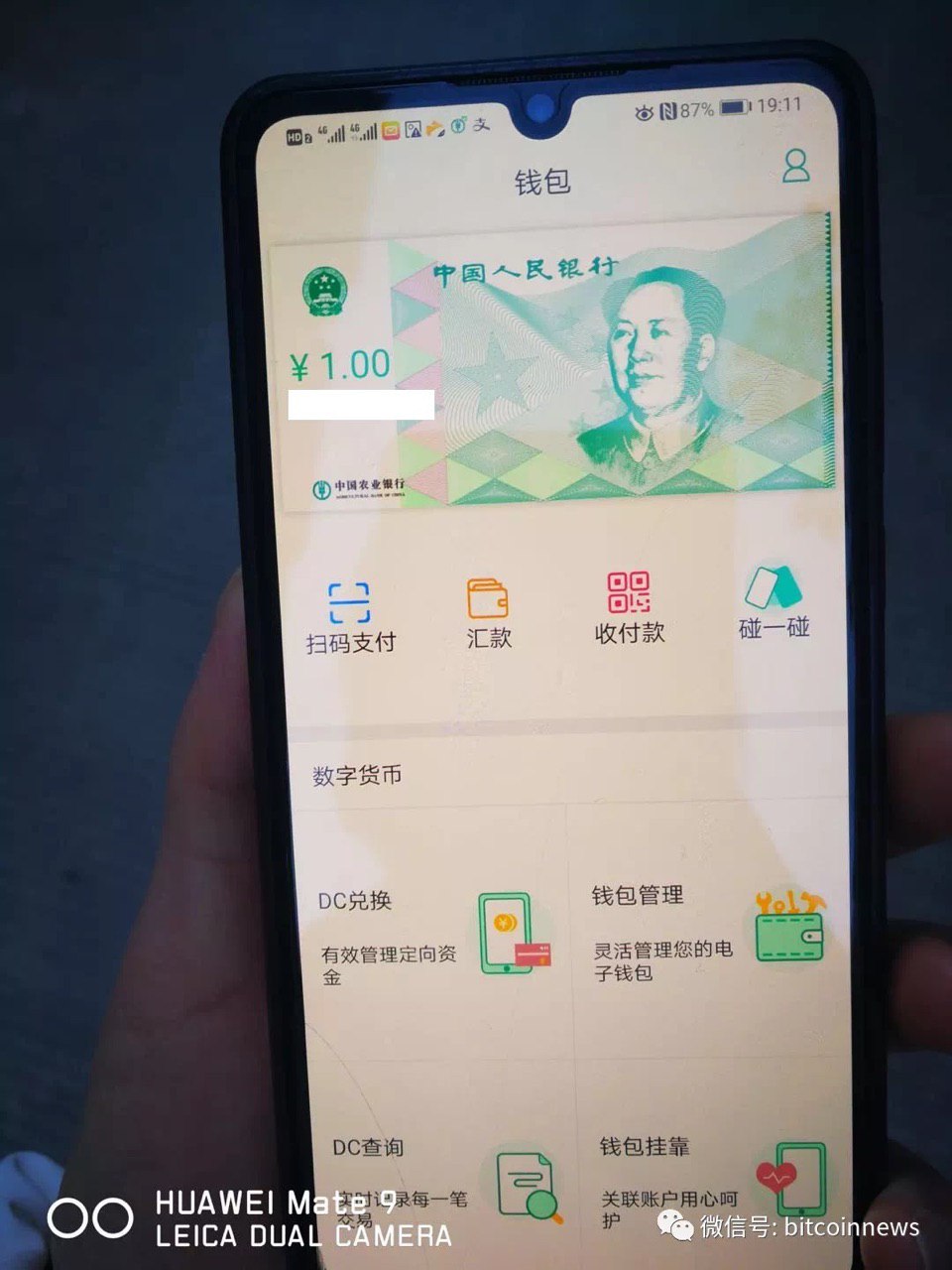 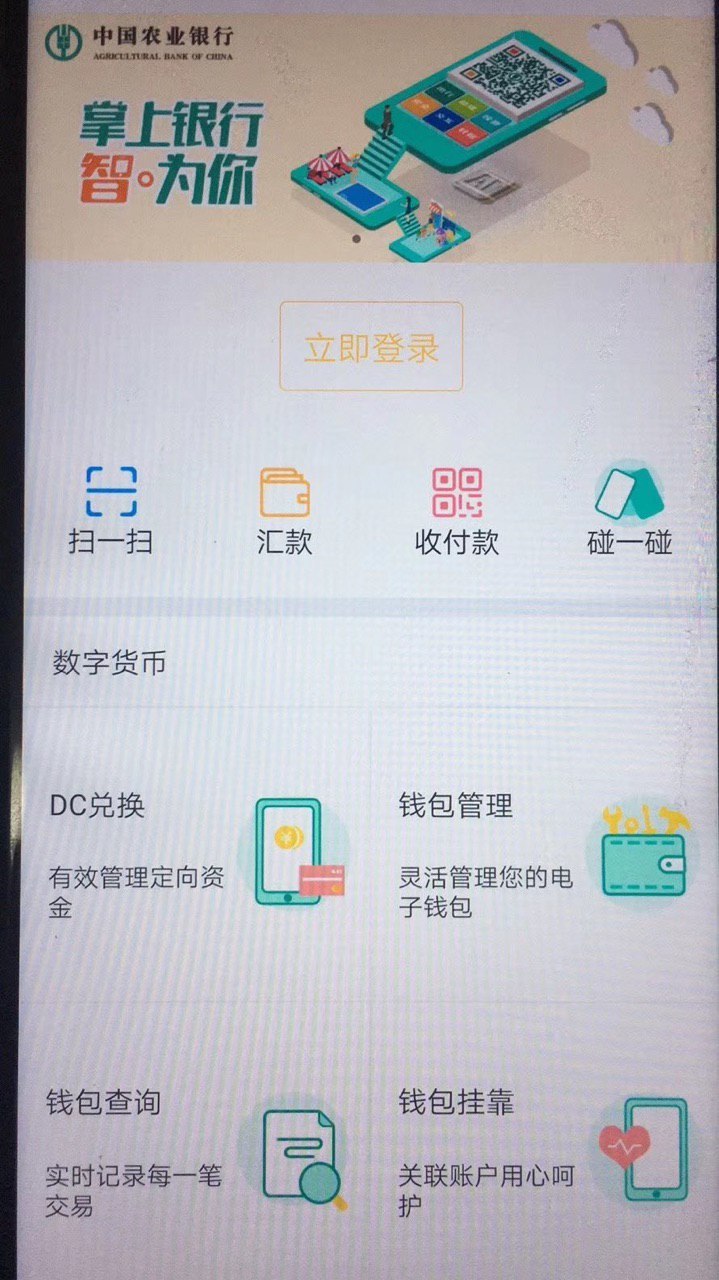 Several basic functions can be seen in the screenshots, and the interface is very similar to other Chinese payment platforms such as Alipay and WeChat Pay. Also, according to various statements of officials, it is already possible to understand many features and functions of the future cryptocurrency. I tried to gather all the information from different sources together.

So, what is known at the moment about the crypto yuan?
A list of all the important facts about the digital yuan:
Is this the beginning of a new financial era?
As can be seen from the information currently available, DC/EP is not the classic concept of a decentralized cryptocurrency like Bitcoin. The users themselves are unlikely to feel a significant difference in using the new system compared to WeChat Pay or AliPay. For the government, the blockchain data structure will ensure unprecedented traceability and control.

It is important to note the advantage China can gain by being the first to release a government backed digital currency at scale. Meanwhile, competing projects like Libra and Ton have been held back and forced to change by regulators.

Today, China is the second economy in the world and the least dependent on oil prices. While there's no doubt that the dollar reigns supreme today, the digital yuan is China's best chance to compete with the dollar on the global scale in the years ahead.

There is no doubt that other governments will quickly follow China's example. Perhaps we are entering a new era — the end of physical cash and the emergence of central bank cryptocurrencies. And there is a strong possibility that this will completely change the international monetary system as we know it.

To get more thoughts and insides about crypto industry you can follow my LinkedIn , Medium , Twitter
• The Chinese cryptographic currency will be called DC/EP, which stands for Digital Currency Electronic Payment.

• The Central Bank has not yet officially confirmed the schedule for the introduction of the digital yuan, but many sources talk about a full launch in mid-2021.

• Besides the standard ability to receive and send payments, one of the main functions is called 'touch and touch' - it allows two people to simply touch their mobile phones to make a transfer.

• Transfers can be made without an internet connection on devices with NFC technology or Bluetooth. Offline transactions are likely to be saved and accounted for whenever the users next get online. But so far not much is known specifically about the settlement mechanism.

• Familiar features such as transfer by account number as well as generation and scanning of QR codes can already be seen on screens.

• The BSN payment system can process up to 300,000 transactions per second.

• The Chinese cryptocurrency is suitable for any financial operations because of its high throughput, including traditional retail transactions and even micropayments.

• Obviously, the crypto yuan blockchain will be centralized.

• Interestingly, the currency will not only work on the blockchain — it will be issued in two main stages: from the Central Bank to commercial banks, and from commercial banks it will already be put into circulation.

• Banks and organizations will be able to act as DC/EP issuers who can exchange the digital yuan with other fiat currencies and assets.

• Patents also indicate that DC/EP will use a two-tier architecture that allows licensed third-party payment institutions and banks to participate in the secondary issuance of digital currency.

• It appears that Alipay itself will participate in the implementation of this scheme.

• All organizations licensed to participate in the DC/EP issue will have a reserve account with the People's Bank of China.

• China also sees its own cryptocurrency as a means of counteracting new digital currencies. According to the Central Bank, a domestically issued digital currency, supported by the government and expressed in the national unit of account, can help limit the issue of private currencies and reduce the risks of financial instability.

• According to China's plan, the crypto yuan will significantly expand financial infrastructure availability in the country. At the same time, as an international means of exchange, it could improve the efficiency of cross-border payments.

• Many sources say that on March 24, the Bank of China completed the development of basic functions and began drafting laws to implement the new technology nationwide.

• One of the main challenges for the Government is to ensure that the crypto yuan enjoys the same sovereignty as the fiat yuan. Strong liquidity guarantees are promised to its holders.

• The central bank said that DC/EP is also planned to be widely used during the 2022 Olympic Games to be held in Beijing.